Randa was the sole survivor of the USS Lawton Incident. His parents were told of the incident under false guises but he knew what he witnessed and became obsessed with the incident. Sometime later, he joined Monarch to uncover the existence of Massive Unidentified Terrestrial Organisms as proof that ancient creatures owned the Earth long before mankind did an that what he witnessed was real and not a cover-up incident.

In 1973, an uncharted region dubbed "Skull Island" was recently discovered via satellite and he and Houston Brooks were present in Washington to convince the Senator to lead an expedition there. He also requested a military escort and recruited the Sky Devils, a helicopter squadron led by Colonel Preston Packard along with anti-war photographer Mason Weaver and ex British Air Forces solider turned mercenary James Conrad to the expedition as well.

Randa explained to Packard of his backstory on the USS Lawton along with his allegations with Monarch and argued that if mankind "kept their heads in the sand", their dominancy would fade and the ancient creatures would take the world back from them. He apologized about the deaths of Packard's men and then pleaded for him to get them all off the island with the evidence of their experience Skull Island. 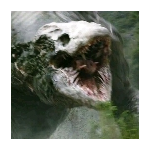